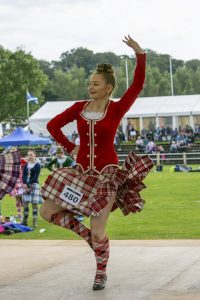 Highland Dancing should not be confused with Scottish Country Dancing.  The Highland Dance is a style of competitive solo dancing developed in the Scottish Highlands from steps taken from the French Court, probably through Mary Queen of Scots, where this style of dance was performed by the Scottish gentlemen who served in the French King’s Bodyguard.  Forms of these dances had occurred much earlier in Scotland of course, the oldest being the Sword Dance which dates from 1054.  Following a duel with claymore swords, the victor took his victim’s weapon and crossed it with his own on the ground.  He then danced over the naked blades in the ecstasy of victory.

Highland Dancing is very technical requiring considerable stamina and formed part of the physical training of the Highland Regiments and travelled through the United Kingdom, the New World and the Commonwealth with them.  It evolved further during the 19th and 20th Centuries in competitions held at public events such as Highland Games and has been subject to many influences, ballet for example.

At early Highland Games the dances were only performed by male performers, however, as women were not expressly forbidden from taking part, a girl called Lorna Mitchell entered a competition.  She has been followed enthusiastically by other female dancers and today they make up over 95% of all entrants.

At Bute Highland Games the dancers perform on three raised platforms.  Their colourful tartan outfits and sheer enjoyment in their sport adding hugely to the overall spectacle, with several dancers performing at the same time to their dedicated piper all determined to win a much coveted medal or cup.  In excess of 330 medals and more than 60 trophies/shields are presented in the Confined & Open Highland Dancing Competition each year at Bute Highland Games.  It is impossible to watch them for long without realising the level of dedication devoted by both the young athletes and their parents!